Open Google Doc of Global Temperature and the Oceans

When we measure “global temperature,” we’re measuring the temperature of the air (and water) at the Earth’s surface. This is obviously just one small fraction of the whole Earth – there’s the rest of the atmosphere and then there’s the ocean. It’s big and it’s deep.

It’s also important to keep in mind that raising temperature is only one of the several things that adding heat energy to our climate system can do. It can also melt ice or evaporate water, which also take up that energy in a different way that’s not expressed as temperature rise.

So if we’re trying to figure out the full story of the heating up of the climate system, we’ve got to look at more than just the temperature record. We want to look at the global heat budget, the whole picture. Here’s what that looks like — see image.

This comes from Murphy et al. 2009 (This graph comes from a post at Skeptical Science.)

It illustrates well just how big a role the ocean plays in the whole system – WAY more heat content that the land and air. I think this is something that is so easy for us to forget – just how big the oceans are, land-lubbers that we are.

In fact, over 90% of the heat trapped by extra greenhouse gases in the atmosphere (put there by people) goes into the oceans. Over 90%! Only a couple percent each goes into warming the atmosphere and the land (graphic from Skeptical Science, data from the 2007 IPCC report):

To us on land, much of this 93% of the extra heat appears to be hidden. But one thing we can see it do is to raise sea level. About 50% of sea level rise comes from just having warmer oceans. Those water molecules are excited at higher temperatures, so they move around more and take up more space – this is called thermal expansion.

So we know that the whole system is definitely gaining heat. And here’s how this all connects back to global temperature:

A single year’s temperature is closely related to what happened to this extra heat that the Earth trapped in that year. Did it stay in the atmosphere (ie, a particularly warm year), or did it go into the oceans (ie, less warm)? And one of the biggest factors in deciding where that heat will end up is…. you guessed it! El NIÑO.

I like how Joe Romm of Climate Progress said it:

“Most of the year-to-year variability in surface temperatures is due to heat sloshing back and forth between the oceans and atmosphere, rather than to the planet as a whole gaining or losing heat.”

During an El Niño year, a big, stagnant (relatively speaking) pool of warm water forms across the Pacific Ocean, keeping heat that might have ordinarily gone into the ocean in the atmosphere instead. Air heats up, temperature measurements go up, too.

But the opposite has been happening over the last few years. Global temperatures (2014 notwithstanding) have remained relatively stable, despite the build-up of greenhouse gases in the atmosphere and the build-up of heat in the whole Earth system. Some scientists say that that heat has gone into the deep ocean; others say it’s elsewhere. This is a topic of hot debate and the location of the “missing” heat remains a mystery for now. For more on this mystery, check out this Scientific American article.

1. What is global temperature actually a measurement of?

2. What are two other things that the extra heat trapped by more greenhouse gases can do besides raising temperature?

3. Does the measurement for global temperature of air and water at the Earth’s surface include the temperature of the whole volume of the ocean below the surface?

4. How much of the extra heat from human-produced greenhouse gases goes into the ocean? How much goes into warming up the air?

5. Why does a warmer ocean take up more space? What is this process called?

6. What does any given year’s temperature depend on?

7. How does El Niño relate to global temperature?

8. Given what you learned in this article about the ocean’s impact on global surface temperature, how important do you think one year’s temperature is in the big picture?

9. If you were studying climate change, would you be more interested in one year’s temperature or in the average temperature of a decade? Why?

ACE Report: What the Heck is Methane Hydrate? 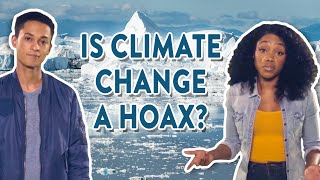